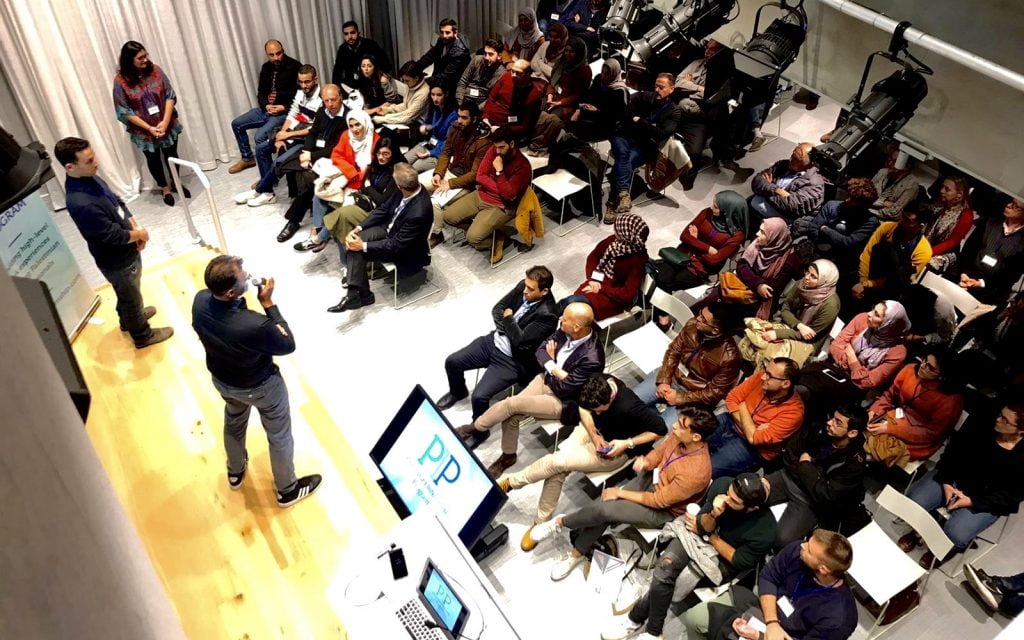 Having worked as a freelance computer engineer for two years in Ramallah, Enas Awwad, 25, saw that her opportunities for career growth were extremely limited.

An ad on Facebook introduced her to the Palestinian Internship Program, a non-profit organization providing young Palestinian professionals with work experience placements at leading multinational and Israeli companies in Israel.

“I didn’t know if someone could really help me find a good opportunity for my career,” Awwad tells NoCamels. She decided to apply nonetheless and today works as a software engineer at sales automation platform maker Colabo in Herzliya. “PIP has changed my life.”

TECH NEWS: Hire The Neighbors: Could Israeli-Palestinian Tech Initiatives Prove To Be A Win-Win Arrangement?

The Palestinian Internship Program (PIP), which recently launched its tenth recruitment cycle, is one of the initiatives working to grow the Palestinian tech sector by sharing Israeli expertise and providing opportunities.

Although Israel is a tiny country, its startup scene is world-famous and a source of inspiration. The local high-tech sector also suffers from 15,000 unfilled jobs – and while outsourcing to Eastern Europe or Asia is popular, some Israeli companies are looking to the Palestinian areas for needed skillsets as well.

“I started the Palestinian Internship Program, which is a US registered non-profit, really to help young Palestinian graduates get valuable work experience,” Kaufmann says in a promo video for PIP. “There really wasn’t much awareness of this talent pool that exists among young Palestinians. But as soon as you start introducing people and they get to see the talent, they want more.”

“In the short term, we’re talking about helping this demographic develop themselves professionally, technically, socially. Our long-term objective is to help stimulate growth in the Palestinian sector. To develop skills in Israel and then go back to their hometowns or to Ramallah or Rawabi, and give back to the Palestinian tech sector,” she tells NoCamels.

Some 3,000 Palestinian information and communication technology graduates enter the market each year. “But about 75 percent of them cannot find relevant jobs,” David Slama, senior director for Palestinian Authority activities at Mellanox Technologies, told NoCamels in a 2018 article on Israeli-Palestinian initiatives.

Companies like Israeli-American chipmaker Mellanox and ASAL, a software and IT services outsourcing company based in Ramallah that employs some 250 technical experts around the West Bank and the Gaza Strip, began cooperating over a decade ago. As of late 2018, more than 120 Palestinian engineers and software developers worked for Mellanox.

PIP brings Palestinian talent to Israeli companies within Israel (along the pre-1967 lines). And Gol, who is originally from Toronto and moved to Israel to helm PIP, says the local high-tech sector is open to hosting interns from Palestinian areas.

“We have about 150 companies in our database interested in working with PIP,” she says.

The companies are asked to host a PIP intern for three to six months. They can choose to extend that relationship.

Awwad, from the West Bank city of Tulkarem, travels one-and-a-half hours to and from Herzliya every day. Her internship with Colabo has ended but she’s continuing as a software engineer there.

For Naama Halperin, co-founder and COO of Colabo, it was a no-brainer to collaborate with PIP.

“Diversity is a huge part of our agenda. We’ve been in this industry long enough to know that the successful companies need to have people from very different backgrounds… and we make a point of having people [on staff] from very different backgrounds,” Halperin tells NoCamels. “When we heard about PIP, having the ability to work with people who are close to us, geographically and in many ways… was a simple decision.”

Awwad is one of 67 participants to date to have completed internships via the PIP program.

PIP runs two cycles a year, some 200 people ages 22-30 apply, and 40 finalists are chosen to take part in the non-profit organization’s networking and workshop events. Just seven to 10 are matched with internships.

“I think the Palestinians have an opportunity to build a ‘startup nation’ of their own and this has to start with young people who have an entrepreneurial drive to build something. And these are the kinds of people we are identifying at PIP, and giving them tools that they can then use to realize their dreams,” Kaufmann says in the promo clip.

Asked if there was any hesitation about coming to Israel, Awwad says her father has worked in Israel for many years so it wasn’t a problem. She did say that her mom was worried about the checkpoint security arrangements, but that PIP takes care of all work permits. (Where relevant, PIP also helps with accommodation in Israel so interns can be closer to work.)

She tells NoCamels that the experience she gets at Colabo supersedes anything she could get in the Palestinian tech scene. “There is no company in Ramallah with such opportunity,” Awwad says.  “Right now, I want to stay forever at Colabo.”

While Awwad sees her near future as part of the Colabo team, Halperin sees the young engineer starting her own company down the road. “I hope in 10 years, when Enas starts her own company, she’ll text me or call me and I’ll be her mentor. I’m a huge fan of hers,” says Halperin.

PIP is an apolitical non-profit and is not affiliated with the Israeli government or the Palestinian Authority. One of its mission goals is to equip Palestinian professionals with work experience and skills to help them create their own “startup nation,” says Gol.

“There is a skill gap. That is one of the challenges we’ve been encountering although we connect our finalists with technical training or boot camps to try and bridge that gap,” says Gol. “When we match a candidate with an Israeli company, I make it clear that they’re not getting a 4.0 GPA student Technion graduate but they are getting a 4.0 GPA from Birzeit University [in Ramallah]. They are very talented and very passionate. They haven’t had the same access and opportunities as the student at the Technion has had.”

“Our graduates have very strong theoretical skills but the practical skills are a bit lacking and that’s where the skill gap comes into play. Once they have been able to develop their skills, they can become the leaders of Palestinian tech,” she says.

Whether a direct mission or not, PIP and other Palestinian-Israeli initiatives introduce both sides to one another on professional and personal levels.

As Halperin says, “it enables us to see each other as people on the most basic level.”

Viva Sarah Press is a journalist and speaker. She writes and talks about the creativity and innovation taking place in Israel and beyond. www.vivaspress.com